During the pandemic, many of us made the shift to work-from-home (WFH). Some even call this the new normal.

Many view the “blurring of boundaries between our work and personal life as a bad thing”.

A new research from the University of Jyväskylä, Finland, offers a new perspective:

ICTs (i.e. smartphones) can help integrate multiple work and non-work roles, by allowing balance, flexibility, and access, and by increasing autonomy and ability to accomplish tasks.

Quoted in the same research, a Scandinavian telecommunications company has this to say about their flexible work guidelines:

Regular working hours are followed during flexible work, but the employees decide themselves on the timing of their working hours.

Now you have the ability to exercise autonomy and freedom to decide when and where to work, as long as you get the job done.

Escape to a digital world

The use of smart devices have afforded the level of flexibility and effectiveness unimaginable before.

Also, via these smart devices and the technology, we now have “a means of doing things which ordinarily may not come easy in real life situations”.

you can get away from your immediate environment (physical) and relate with people in a new community (a virtual community) and share with people of like minds.

This ability to turn to social media as a form of escapism is eerily similar to the film, Ready Player One, adapted from the science fiction novel of the same name.

much of humanity uses the OASIS, a virtual reality simulation, to escape the real world.

Of course some may argue that it is absurd:

A mass delusion that assumes that the future should look like Ready Player One for some reason.

At the same time, there are some who think we are already in a world similar to Ready Player One:

Which leads us to the term metaverse.

What is the metaverse

The metaverse is a collective virtual shared space, created by the convergence of virtually enhanced physical reality and physically persistent virtual space, including the sum of all virtual worlds, augmented reality, and the Internet.

Cathy Hackl crowdsourced the definition of metaverse via LinkedIn.

Here are some interesting ones:

My general description: The Metaverse crosses the physical/digital divide between actual and virtual realities.

An exponentially growing virtual universe where people can create their own world how they see fit adapting experiences and knowledge from the physical world.

My definition is more around its purpose and driver of adoption than its tech composition. The Metaverse is the next significant third space (coined by sociologist Ray Oldenburg) as not home (1st), not work or study (2nd) but where you will spend your leisure time. It is the anchor of community life and where you meet with old and new friends.

A nebulous, digitally mixed reality with both non-fungible and infinite items and personas not bound by conventional physics and limitations.

These definitions do suggest that, in the words of Kevin Kelly, “our physical reality will merge with the digital universe”.

At one level, the idea of creating a phygital experience is expected to lead to “more satisfied customers, increased customer engagement, and more loyal customers”.

At another level, platforms like Upland is the place where you can “buy, sell and trade virtual properties mapped to real addresses”.

Similarly, Decentraland, is “the first fully decentralized world, Decentraland is controlled via the DAO, which owns the most important smart contracts and assets of Decentraland”.

While this might not make sense to the rest of us, it was quoted that:

Decentraland has seen more than $50 million in total sales, including land, avatars, usernames and wearables like virtual outfits. A patch of land measuring 41,216 virtual square meters sold for $572,000 on April 11, which the platform said was a record.

What does this mean for you

First, understand the infrastructure that made these ideas a reality—the decentralized web or Web 3.0.

The Web3 Foundation believes that:

Second, this has given every creator the ability to benefit monetarily from their content via NFTs or non-fungible tokens.

it’s unique and can’t be replaced with something else.

To illustrate, the legal tender notes you carry in your wallet is fungible. Meaning, if you give me a $10 note and in exchange I give you five $2 notes, they are exactly the same.

A bitcoin is fungible like your legal tender notes.

However, an NFT, which is part of the Ethereum blockchain, is non-fungible.

For instance, if you own a copy of Harry Potter and the Philosopher’s Stone in it’s first edition, you would not exchange it for the same title of a later edition.

Simply because it is one-of-a-kind.

Which explains the mind blowing $69 million price tag for the NFT of Everydays: The First 5000 Days by Beeple.

If you want to get started with creating an NFT for your content, like I did, then start here.

The pandemic has afforded us an opportunity. Would you seize it? 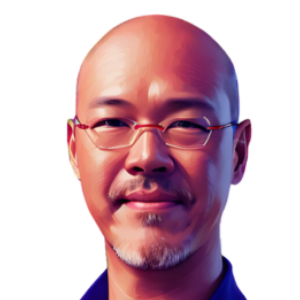 Hi 👋 I’m Melvyn Tan. I've always found it difficult to describe what I do within the confines of a job title. Over the last 19 years, I've built a career around a series of projects, of which Reinventing is my latest.